The Best Reasons To Visit Barbados

Famed for its fine pearlescent white beaches and warm azure waters, Barbados is the Caribbean island that has it all. But there’s more to this island than meets the eye. Past the laidback lifestyle and the island’s dreamlike-haze, you’ll uncover a lively nightlife, the heartiest comfort food and a to-die-for shopping scene.

Not that you needed any more convincing (but just in case), we’ve listed all the glorious reasons to visit Barbados…

Will unquestionably steal your heart. But besides their undeniable appeal, two of the world’s rarest sea creatures make their nests on the beaches of Barbados, the Hawksbill and the Leatherback Turtles. Sadly sea turtles have been subjected and mistreated to years of hunting (for their meat, eggs and shell) – BUT you’ll be pleased to know that there is in fact, a hunting ban in Barbados, allowing these beauties to rest and repopulate.

If you do happen to sight a sea turtle, then, of course, enjoy it but don’t forget to give them enough space (as they could be nesting) – after all, the island has enough room for animals and admirers alike. But if you can’t shake that niggle that something might be wrong, get in touch with The Barbados Sea Turtle Project. They operate a 24hr hotline to monitor sightings and any emergencies. So ping them a line if you spot hatching or nests threatened by high tides!

Is as good as it gets. Bajan people are welcoming, helpful, good-witted and friendly. If you’re in need of anything, big or small, they’ll do their very best to accommodate. Those qualities are especially important when you’re travelling with a young family. Let’s face it, there’s nothing worse than travelling to unknown territory only to be fronted with cold and unfriendly locals. It’s the cherry on top of an already loaded exotic cake. 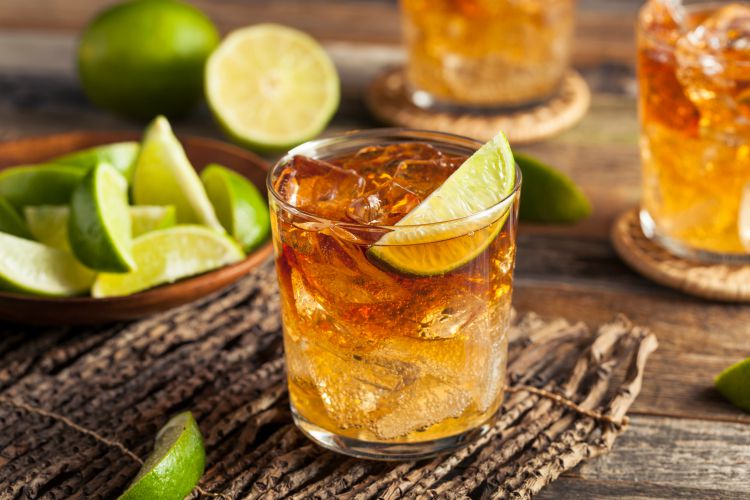 Dark and Stormy Rum Cocktail with Lime and Ginger Beer

The home of sweet, sweet rum. And no holiday to Barbados would be complete without sampling a fair share of the world’s finest. If rum punch and piña coladas arent enough to hit the spot, you can book a tour at Mount Gay and take part in one of five different experiences (the bottomless rum sounds like a winner though).

*If rum doesn’t float your Caribbean boat, there’s plenty else to try. From award-winning Banks Beer and ever-refreshing coconut water to the island’s favourite mauby. Made from the bark of the mauby tree, this zinger is treasured among the locals, and once you get a taste for it, you’ll understand why.*

Barbados might be best recognised for its paradisic beaches, but I bet you didn’t know that it’s also referred to as the Culinary Capital of the Caribbean.

Cou Cou served with Flying Fish is the national dish of Barbados. It’s made with cornmeal and fresh okra which is then served with flying fish in a stew-like sauce. It’s an absolute moreish treat. And then there’s another favourite, especially for the carb aficionados – the macaroni pie. It’s a rich, baked version of mac and cheese and includes generous helpings of cheese as well as some extras flavours like ketchup and mustard. It’s hearty, calorific but most importantly utterly delicious.

Barbados’ capital is an absolute dream for shopaholics and budding trendsetters. From bespoke jewellery shops, clothing boutiques and farmers markets (TIP: stock up on Bajan spices), there’s something for everyone to indulge in.

For duty-free shopping head down to the Limegrove Lifestyle Centre. You’ll find some of the bigger brands like Ralph Lauren and Longchamp. The centre even has a cinema, entertainment platform and a selection of bars and cafes, so you and your brood can make a whole day of it.

I know, it’s a little controversial to put beaches so far down on the list, but hear me out. We all know that Barbados puts the B in beaches, so it’s only fair to showcase all it’s other offerings, before getting down to the crown jewels.

On the west coast, of the island, you’ll find white sandy shores with azure waters fit for a cool gentle swim or a smooth ride on a jetski. Whereas in the south and east coast, you’ll find a lively surf scene with a plethora of ongoing watersports. And then in the north, the coast is undeveloped and brimming with clifftops and coves.

You didn’t think we’d forget to mention the weather, did you? Us Brits love to natter about the weather, so it’s definitely not surprising that Barbados’s year-round sunshine is one of the many reasons to visit.

The average daytime high is around 30°C, but thanks to the northeastern winds, it rarely gets unbearably hot. Although if you’re easily agitated by the heat, then the evenings will provide the ultimate release.

The vivid images of blue skies and sunshine for days does ring true to Barbados, but you can expect the occasional quick rain showers (July-December time).

The island is ringed by beautiful coral reefs, all of which provide an excellent environment for snorkelling and scuba diving. But not only that, as a result of the coral sediment there’s numerous caves and underground lakes to be explored. The most famous is arguably Harrison’s Cave; a network of caves, waterfalls, pools and fantastic stalagmites and stalactites. It’s an experience that money can’t buy.